Call us today to talk to one of our pest control experts for more advice on how to get rid of wasps and their nests.
PEST CONTROL QUOTE

There is nothing worse on a fine summers day than being relentlessly plagued by wasps. More than just a nuisance, they can give you a nasty sting, which can be even be life-threatening for some unlucky folk. Wasps can nest outside or inside, in colonies of up to 20,000. They are prone to attack if disturbed, so it is essential to employ the services of a professional if you spot the signs of a wasp nest in your garden or property.

Project Multi Pest are highly experienced in removing wasps nests from homes and businesses. Our professional pest controllers are discreet and can destroy a nest in no more than an hour. We operate throughout Kent and London, so call us today for a quote and put an end to your wasp problem.

Wasp nests in the home

Many of us have experienced a wasp sting and it is unpleasant at best, so it is little wonder that we are on constant ‘wasp alert’ in the summer. While a few wasps are not a cause for concern, a wasp nest on your property can be unnerving, especially if you have children. Nests can often be found in the garden and indoors in places such as lofts and garages. It is ill advised to approach a wasp nest yourself, as they are volatile and prone to attack. If you spot or suspect a wasp nest, you should contact a professional pest controller like us.

The presence of a wasp nest is bad news for businesses, posing a health and safety risk. They can cause distress to both staff and customers, and their sting can be lethal for those with allergies. Wasps can also land on some pretty unsavoury surfaces so there is a risk of food contamination, spelling disaster for restaurants. For these reasons it is essential not to ignore a wasp nest. They are easy and affordable to remove with the services of a pest control expert.

How to identify wasp nests

Wasps are highly social creatures and their sole reason for being is to reproduce. The queen wasps preside over the colony and begin to emerge in spring, but wasps are more prevalent in the summer months when the workers hatch. It is widely known that wasps can sting more than once, but in fact it is only the female that can do so.

Common wasps don’t live long, no more than a year in the queen’s case, and die off around autumn time. They go out with a bang however, as at that time of year their diet includes fermented fruit which makes them ‘drunk’ and more aggressive. German wasps are also common in the UK and are much hardier, being able to survive through winter in the right conditions.

Wasps live in nests of up to 20,000 which they build in the hollows of trees and bushes. If you are unlucky, they can also nest inside.

Be sure to check the following places if you suspect wasps have come to stay.

Wasp nests are grey-brown and have the appearance of an elongated sphere hanging from a stem. They look like paper because they are made from chewed up wood, sourced from trees, shrubs and garden fences. They are a feat of engineering, some with a loose honeycomb structure and some with swirled patterns, depending on the species of wasp.

How can I find a wasp nest?

If you start to spot more wasps than usual, it’s likely there is a nest nearby. To find its location watch out for worker wasps who tend to use the same flight path, and follow them with caution. A large number of wasps should be audible, so also follow your ears.

Wasps can build nests above and below ground, so look out for them emerging from and returning to holes underground. German wasp nests are only partly visible above ground.

Once you have located a wasp nest, it is important not to get too close in case they become agitated and attack.

It is very dangerous to attempt to remove a wasp nest by yourself, as they can number up in their thousands and can be very aggressive even with the slightest disturbance. If they decide to attack, it will result in multiple stings to you and anyone else nearby. The safest thing to do is to employ a professional pest controller to remove the nest.

At Project Multi Pest, we are highly knowledgeable about wasps and their behaviour, and can take the relevant precautions to ensure the nest is removed safely. We use PPE for to protect ourselves and our equipment can reach nests in the most inaccessible locations. The professional grade insecticides we use are powerful yet completely safe to humans and pets. Treatment is fast, taking no longer than an hour if the nest is easily accessible.

Call Project Multi Pest today to talk to one of our pest control experts for more advice on how to get rid of wasp nests, and to get a pest control quote on 0800 0246293.

Is a wasp nest dangerous?

Wasps are highly volatile and will attack at the slightest disturbance. When they sting, they give off a pheromone as a warning so other wasps will follow suit. It is highly advised that you do not attempt to remove a wasp nest by yourself, but to employ a professional pest controller.

How can I prevent wasps?

To prevent wasps nesting in your property, be sure to seal any potential entry points, especially the roof. Try to keep the windows and doors to your home closed as much as possible, and in the summer, use fly screens to keep them out. To keep them away from your picnic or barbecue, you could use a wasp trap, or simply a container with water and sugar.

Should I leave a wasp nest alone?

As annoying and threatening as they can be, wasps are important pollinators. If you discover a wasp nest above ground on your property that is safe to be left alone, you should do so. Common worker wasps live a matter of days, and queens no longer than a year. They only use a nest once, so it’s likely they will have all vacated it in a matter of months.

If you suspect a nest underground or see one partially above ground, it’s likely to be that of German wasps, who are hardier and survive through winter. In that case, it is wise to have it treated or it may grow out of hand.

How can you tell a wasp from a bee?

Wasps and bees have a similar taste in outfits and are often mistaken for one another. Although they both have distinctive yellow and black markings, the main difference in appearance is that bees are rounder and hairier. Wasps are more elongated and smooth-bodied, with more defined and vibrant stripes.

When it comes to their nests, both wasp and bee dwellings can have honeycomb structures, but beehives are denser in structure, and waxy and yellow in appearance. If you suspect you have a beehive on your property, then it is important to enlist the services of a professional beekeeping association.

Please complete the contact form for a call back from one of our specialists: 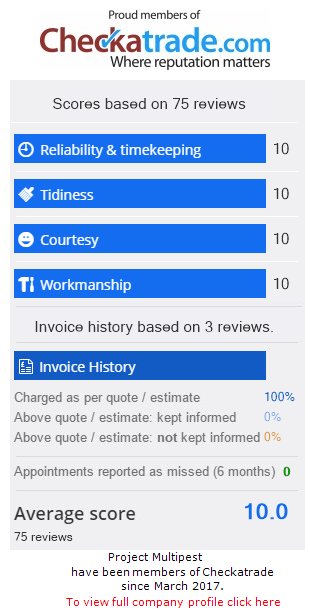 Covering Ashford to Dover and Canterbury, PMP are the experts to call for pest control across Kent.
Learn More

Our technicians cover London and are specialists in getting rid of a wide range of pests including birds and insects.
Learn More

Wasp Control in London and Kent

Project Multi Pest promise a professional and swift service to rid your property of wasp nests. Our methods are safe and highly effective, and we work hard to cause as little disruption as possible. Wasps are undoubtedly a threat, and we understand that they can cause distress and panic. We offer a 24-hour service to relieve you of your worry and you can be sure of a sympathetic service from our friendly team of pest control experts.
PEST CONTROL QUOTE